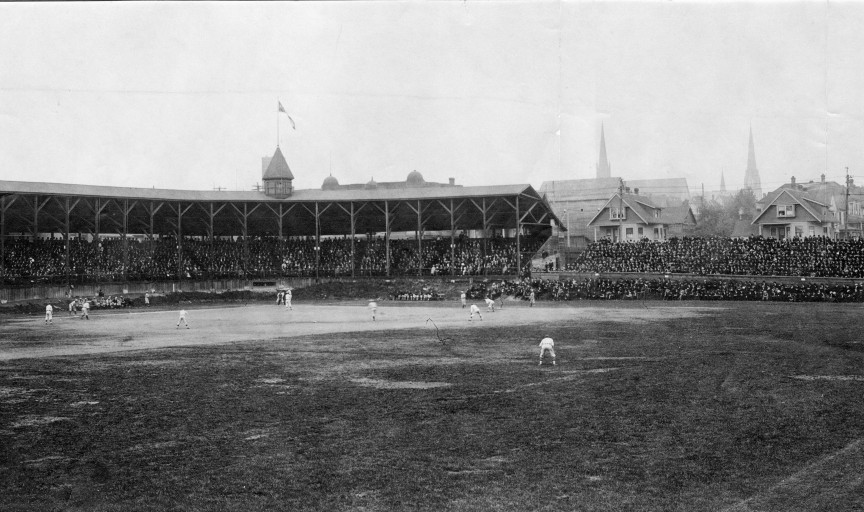 At the turn of the century semi-professional baseball was a popular attraction in the booming mill town now known as Vancouver. Touring ball clubs from across the US drew large crowds to the Powell St. grounds (now Oppenheimer park) each summer. These events were popular enough that local businessmen A.E. Tulk and W.D. Haywood felt that bringing professional baseball to Vancouver was a viable business proposition and in 1905 the pair were granted a Northwestern league franchise. The city’s first professional baseball team the Vancouver Veterans, played out of the newly erected Recreation Park at the southeast corner of Homer and Smithe (seen above in 1910). The new team played against the Bellingham Gillnetters, Everett Smokestackers, and Victoria Legislators/Spokane Indians. The Veterans finished the 1905 season with a record of 45/52 but unfortunately for their fans, Tulk and Haywood chose not to field a team the following season. A more in depth look at the ups and downs of the Veterans’ 1905 season can be found here.

The most notable of the Veterans’ players were Farmer Weaver (the original Buck Weaver, famous for having fired his pistol at a fly ball during a game on the 4th of July, 1893, and later for having served a prison term for fathering a child with his adopted daughter against her will), and Piggy Ward , both of whom had lengthy major league careers before arriving in Vancouver. Many of the team’s players had come to Vancouver because of prior relationships with the team’s manager John McCloskey. McCloskey had worked his way across the US from his home of Louisville, Kentucky playing for and managing minor league squads in several leagues as well as managing the Louisville Colonels of the National League. When the Veterans folded at the end of the 1905 season McCloskey went on to manage the St. Louis Cardinals for three seasons before returning to the minors to finish out his career.