We at Baseball in Vancouver are fans of all baseball in our province, professional or amateur and with the UBC Thunderbirds kicking off their season this week, that got us thinking about a very rare piece of UBC Baseball history.  We were lucky enough to come into possession of a very rare UBC baseball collectible (as not many UBC Baseball things have ever been created) and we wanted to share it with you.

A team set of the only UBC baseball cards ever made.

The cards were manufactured for the 2009-2010 UBC Team and only a small number were made, most given to players, coaches and other supporters of the team. We are lucky enough to have a set in our collection and wanted to show off the highlights – many of these cards are the only ones players would ever receive over their careers, but we wanted to share some of the players who went on to play professional baseball.

seasons in the minors, including playing one game in AAA. Sammie is currently the assistant coach for UBC this year.

Coaches were also included in this set. A UBC alumni Janes was drafted by the Arizona Diamondbacks in the 27th round. After playing 2 seasons in the minors, Janes returned to UBC as a hitting coach for 2010.

Brown was selected in the 50th round of the 2011 draft by the Blue Jays and went on to play 3 season in the minors, including 46 games for the Vancouver Canadians.

Taken by the Cubs in the 33rd round of the 2011 draft, McDonald also completed 3 seasons in the minors before calling it quits reaching high A ball.

The Langley native was taken in the 45th round by the Blue Jays and only spent 2 seasons in the minors, but did spend his first year with the Vancouver Canadians before being sent down to the Rookie League.

One of the most interesting players in the set in my mind, as he is still active in professional baseball, but not necessarily in the way that most people think. After playing for the Birds, Greg went out to the work for the Vancouver Canadians. as a video coordinator where he got to see the likes of Miguel Castro pitch. Last year he was called upon by the Toronto Blue Jays as a Bullpen Catcher where he spent a good part of the season warming of the Blue Jays staff.

The backs of the cards contained the basic information about the players such as their positions, height and weight, but also had one line for the players to have some fun with which was a nickname line. A lot of the players left that blank, but that best nickname goes to Delta native Mike Elias. 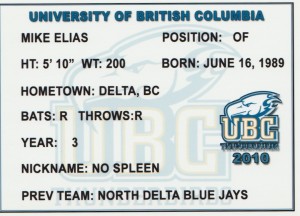 Want to see any of the other cards and players from this set? Let us know in the comments below!