As a lifelong collector, historian and lover of baseball history, people often ask me what my favorite Vancouver baseball artifact is. Trips to SafeCo Field, the home of the Seattle Mariners, have me drooling over the fantastic collection of Pacific Northwest baseball collector Dave Eskenazi, which includes everything from Ten Million’s bat to rare Senior Amateur League jerseys.

My favorite artifact though does not live in either of those places or the homes of the many other collections that I’ve been privileged to look through.

My favorite artifact resides in the BC Sports Hall of Fame at BC Place, and due to its fragile nature is not often on display or known by most.

Looking through the massive collections storage room, if you didn’t know exactly what you were looking for you would never find it. When you pull out the drawer in which it resides, at first glance you might assume it to be an old cigarette case but when you open it up, the battered and broken pieces hold one of the best baseball stories in Vancouver history.

The year was 1914 and the Vancouver Beavers were atop the Northwest League. The league itself was packed with past and future MLB stars, including greats like Joe McGinnity and Dutch Ruether.

Bob Brown, the Mr. Baseball of Vancouver did everything for the team that year, from building their home park the year before, to managing the team and playing for it.

The Beavers were playing a game against their rivals the Seattle Giants and Bob Brown go into an argument with umpire Pearl Casey.  This was not uncommon for Brown, who media often referred to as the “fiery redhead”. Casey having decided that Brown had been given more than his time to share his disgruntled feelings, gave Brown one minute to exit the field, and pulled out his pocket watch as a show of bravado. Brown never one to be shown up by umpires, snatched the pocket watch out of Casey’s hand and threw it with all his might against the backstop, shattering it into pieces.

A stunned Casey, let Brown stay in the game.

Just as Brown’s minute has never ticked off, so too has his legacy and impact on baseball in Vancouver never faded. 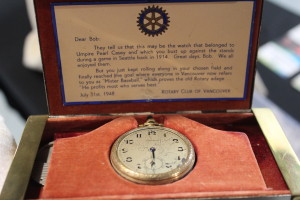 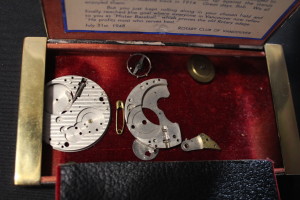 The broken pieces, after Brown smashed the watch