This will be an ongoing series, with each BC born baseball player who has ever played in the bigs – whether a single at bat, or finishing their careers with MVP trophies and more – receiving a story. This is home grown. 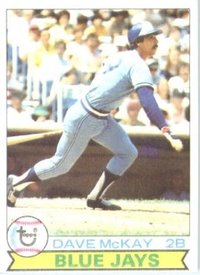 On April 7th, 1977 the Toronto Blue Jays became the second Canadian baseball team to join the MLB. The crowd of 44, 649 were not deterred by the snowstorm which had blown into town.

The Blue Jays starting lineup featured one Canadian, Dave McKay starting at 3rd base.  McKay would go 2 for 4 in the game and would spend parts of 3 season with the Blue Jays finishing with a line of .223/.252/.314.

McKay was born in Vancouver on March 14, 1950 and at the age of 11 got his first taste of organized baseball playing his Little League baseball for Little Mountain, the oldest Little League in Canada.  Although Vancouver has always been a hockey town, McKay grew up in the shadow of 29 future and past Major League Baseball players who played for the Vancouver Mounties in 1961 just across the street from Little Mountain at Capilano Stadium.

McKay attended Sir Charles Tupper for high school, but never played baseball there as there was no high school team.  A tall slender infielder, McKay worked hard and spent his college days playing at Columbia Basin Junior College and Creighton University. As the MLB draft at the time did not include Canadians, McKay signed a contract with the Twins in 1971 and his big league career began in 1975 with the Twins.  In his first at bat facing Detroit Tigers starter Verne Ruhle he did something no Canadian player has ever duplicated- he hit a home run in his first MLB at bat.

It is his post playing day career though that has made McKay one of the most respected names in baseball. McKay became close friends with Baseball Hall of Famer Tony La Russa (who also has a Vancouver connection as he played in  on the 1967 Vancouver Mounties). McKay would spent time with La Russa on the Athletics and Cardinals coaching staffs, winning 3 World Championships the first in 1989 with the Athletics, and the last two in 2006 and 2011 with the Cardinals. After La Russa retired, McKay has found work with the Chicago Cubs as a base coach, and currently with the Arizona Diamondbacks as their first base coach.

For all his years in baseball, McKay was inducted in the Canadian Baseball Hall of Fame in 2001. Dave McKay is home grown.

Which BC MLB player do you want to read about next? Let us know in the comments below!